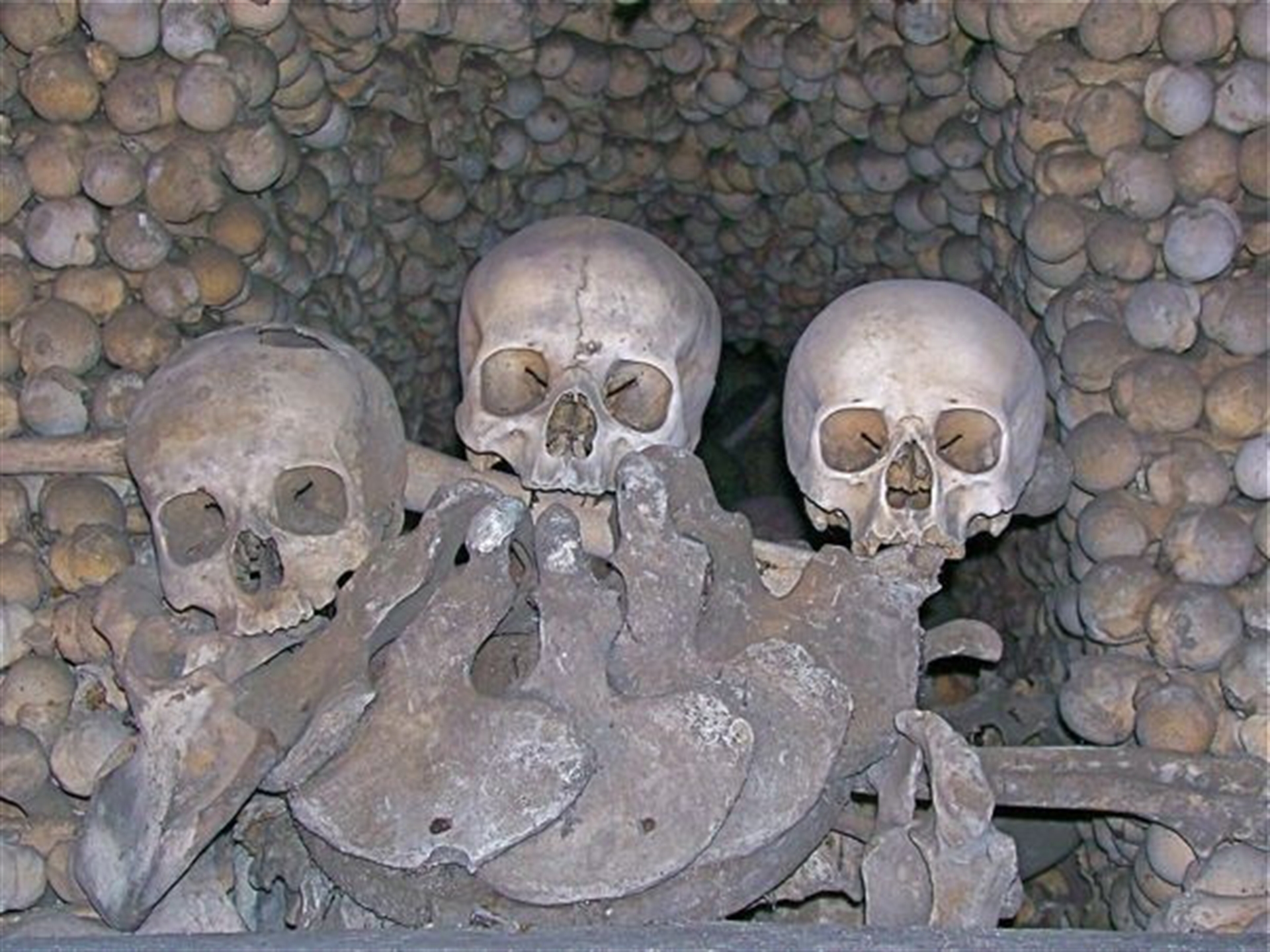 Located a short train ride away from Prague is the Sedlec Ossuary. In the Sedlec suburb of Kutna Hora you will find the Sedlec Ossuary, which from the exterior looks like a normal chapel in a village, however, the interior decorations are anything but normal. It is estimated that the Roman Catholic chapel houses from 40,000-70,000 skeletons, victims from the Black Plague. Some of the bones have been artistically arranged in the chapel to form a chandelier that contains every bone of the human body, a Schwarzenberg family coat-of-arms, garlands, monstrances and chalices. The remainders of the bones are formed in four large pyramids that feature large wooden crowns hanging above them indicating the kingdom of heaven. The bone arrangements are the work of František Rint, a woodcarver employed by the Schwarzenberg family in 1870 to put the bones into order. You can see Rint’s ‘signature’ as his initials are located on the right side of the staircase when you enter. It is possible that František Rint’s inspiration for the ossuary came from the Capuchin Crypt in Rome. The early history of the chapel is interesting as well; King Otakar II sent a Cistercian monk from Sedlec to the Holy Land in 1278. He brought back with him a jar of soil that he sprinkled over the cemetery, making the cemetery a sought after burial place for the wealthy. In the mid 14th century social rank was ignored as Black Death cared not for rich or poor but for everyone and the cemetery was overloaded with death. After the Hussite Wars in the early 15th century the cemetery was utilized once again. A Gothic Church was then built in the middle of the cemetery, complete with an upper level and a lower chapel to be used as an ossuary. The job of sorting through and stacking the bones that had to be dug up to build the chapel was given legend have it to a half-blind monk. The appearance of the bones today is the work of the above-mentioned František Rint. The unique Sedlec Ossuary is definitely worth the short train ride from Prague.

The Baroque Loreta in Prague was commisioned by Baroness Beligna Katherina von Lobkowicz in 1626 and was maintained by the Capuchins, an order connected with St. Francis of Assisi and his brotherhood. ...

The Church of St. Peter and St. Paul

Perched imposingly atop the mystical Vysehrad fortress and impressively dominating the area is the Church of St. Peter and St. Paul, a recognized landmark with its slender neo Gothic double spires. Co ...

The Church of our Lady before Tyn

This Gothic church from the mid 14th century is perhaps the second signature landmark in Old Town Square (after the Astronomical Clock). It was the main church during the time of the Hussites. The int ...